Yesterday the kids and I went to take Chad some supper in the field. 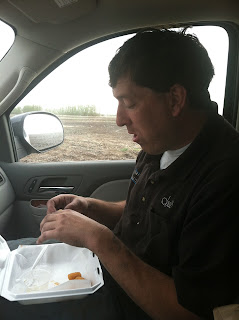 He took a couple minutes to chat and eat his meal.

He's planting corn, but it's been slow going lately as we've had some intermittent rain showers. He said it feels like he's spent more time out of the tractor pulling mud off of the equpiment than he has actually spent planting.


They have a little over half the corn acres left to put in. The forecast looks dry until next weekend, though, so hopefully they can get some good days in.
Posted by Weckerly Farms at 6:38 AM